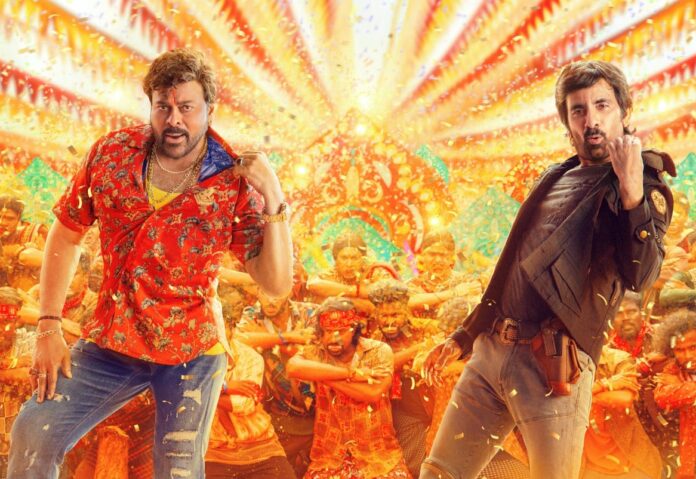 Plot: Veerayya (Chiranjeevi) who owns an ice factory gets into losses due to his betrayed friend and works as a fisherman in seaport. A suspended police officer Seethapati (Rajendra Prasad) seeks Veerayya’s help who catch a ruthless criminal Salmon Ceasor (Bobby Simha) who have escaped from jail by killing many police officers. Will Veerayya helps Police to catch the criminal, will Veerayya succeeds to catch Salmon. In Veerayya past interconnected with this criminal. To know this one has to watch the film.

Performance: Chiranjeevi is the soul for the film, the vintage Chiranjeevi is back with this film. His comedy timing and dance added more flavour to the film. Chiranjeevi looks ultra-stylish in this film. Sruthi Hassan has got decent screen space and bagged another good film in her kitty. Not to mention Mass Maharaja Ravi Teja’s cameo is the highlight of the film, the way he carried himself in his role is speechless. Rest of the artists have done justice to their roles. After a classy role in God Father Chiranjeevi is back with a mass action film Waltair Veerayya.

Technical Aspects: Director Bobby has failed to executive to the film properly, its routine revenge story there is no new concept in the film. Bobby failed to narrate the film properly. Music director Devi Sri Prasad bagged another charter-buster album after Pushpa, the BGM and songs are the main pillars of the film. The production values of the are on peaks, one will get poonakalu with his songs in the film.

Verdict: Waltair Veerayya is a regular revenge drama without any new aspects, one can watch the film for Chiranjeevi and Ravi Teja’s fans. Non will get Poonakalu while watching the film.